How to Conquer the Pesky White Fly! 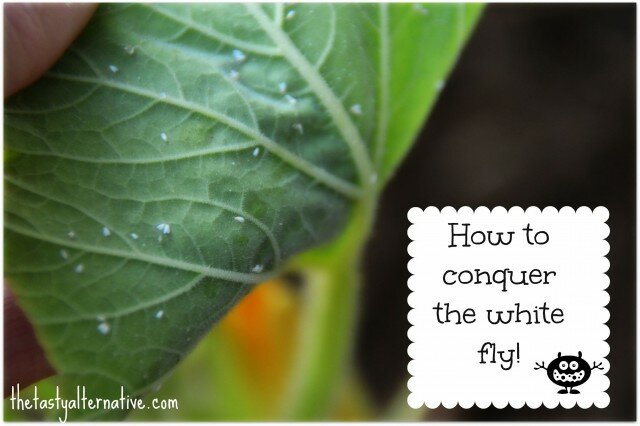 Over these last two gardening seasons, white flies have annihilated my pumpkin and squash plants! At first I figured it was just me, as I’m not that experienced at growing pumpkins or squash…but no. Oh no, it’s the work of these little annoying and destructive flies: White Flies.  This year I am determined to conquer them and save my pumpkin plants.  This post shares some interventions I have used and what I’ve learned about about the pesky white fly.

Okay, so I read and read and read about these files and came upon some pretty consistent information about them. #1:  They are immune to most ALL insecticides, #2:   They are super resilient which means it takes a lot of work to get them under control, and #3:  They will ultimately kill your plants if you do nothing.

So something has to be done!  But what?  Here is what I’ve tried. 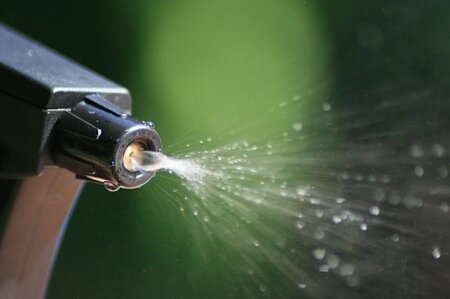 Many articles and videos suggest a homemade spray including a mix of water, soap, and other supposed white fly replants.  So I made my own from a variety of suggestions. (click photo for picture credit)

It worked pretty good and I did notice a drop in numbers.  But the spray only kills the live bugs…not the eggs, so you have to spray each day to catch the new eggs and the spray started to wilt the leaves. White fly eggs hatch after 5 days, so some articles suggest reapplying the spray every 5 days, but I sprayed every two days. Still, it did not get rid of them entirely.  Missing only one leaf will hurt your efforts with the spray. 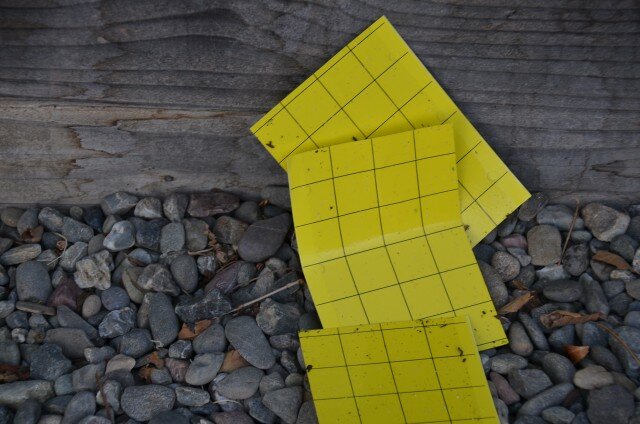 Apparently, white flies are attracted to yellow.  So sticky pads can be helpful to find out if you have white flies, but these are by no means a good defense.  These did not work very well for me, as you can see, they ended up out of the vegetable bed and on the ground.  I put them on sticks in the middle of the pumpkin leaves and they eventually fell off the sticks and into the soil.  Many white flies were stuck on them, but I could have killed just as many with the spray.  These pads are a waste of money and as waste of material.  Another option is to paint a piece of wood yellow and add lanolin to the wood. 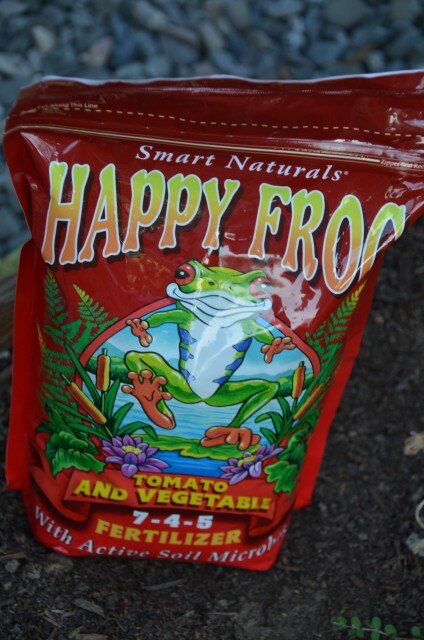 Fertilizer helps strengthen the plant against disease, so naturally I wanted to give the soil a little boost.  White flies suck the juice out of the leaves leaving the plant quite vulnerable.  So it makes sense to give the plants some vitamins.  I read that worm castings change the flavor of the leaf juice and the white flies don’t like it.  I didn’t get worm casting specifically, but I will try it if the infestation continues.  For now, a good feeding will help strengthen the plant’s defenses I am sure. 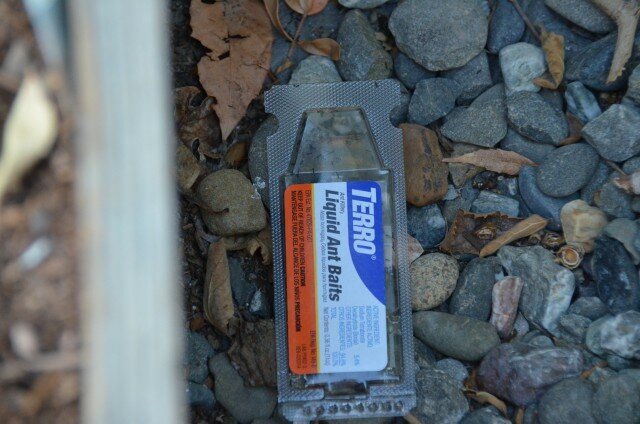 According to some avid gardeners, ant infestations detract natural white fly predators.  My vegetable beds are indeed inundated by ants.  It’s so dry here in Northern California and the ants are thirsty, so they are swarming my the beds for water and apparently love squash and pumpkins plans, as they are crawling all over.  My favorite defense is TERRO for ants.  We have used it before during a home invasion.  The idea is to get to the nest via this method rather than use spray. I placed several of these out in the garden in hopes it will decrease the ant infestation on the plants. 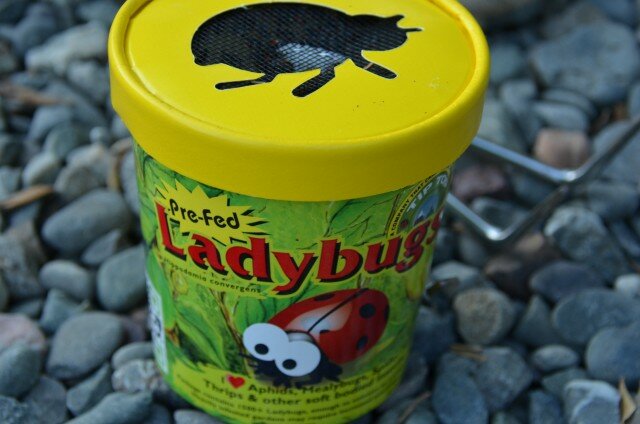 I’ve read over and over that adding natural predators is one of the best ways to control white fly populations.  So I went to my local nursery and purchased a small box of lady bugs (that held a surprising amount:  1,500).  About an hour after sunset I sprinkled them all around the plants.  So we shall see if they stick around and feast on those pesky white flies and I will update with the results in about a week.

Here are some additional pictures of the lady bugs roaming around the vegetable beds exploring and (hopefully) feasting. 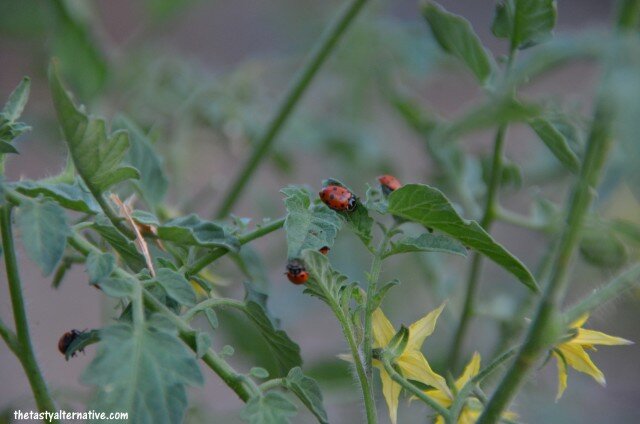 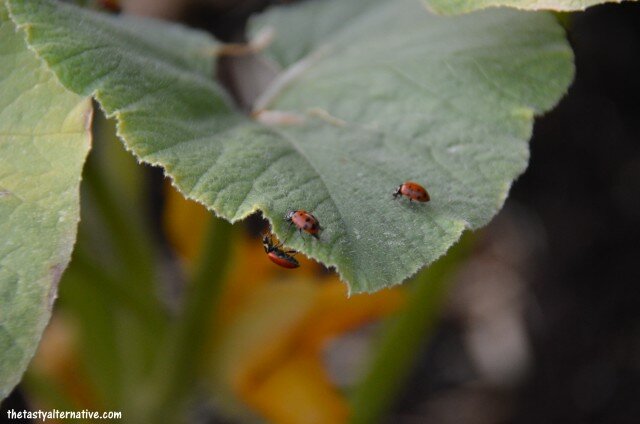 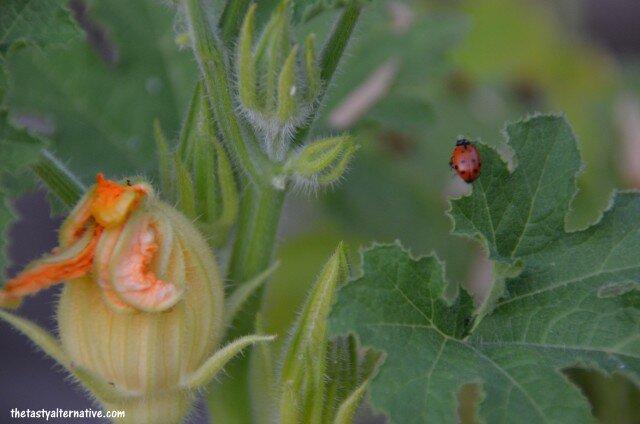 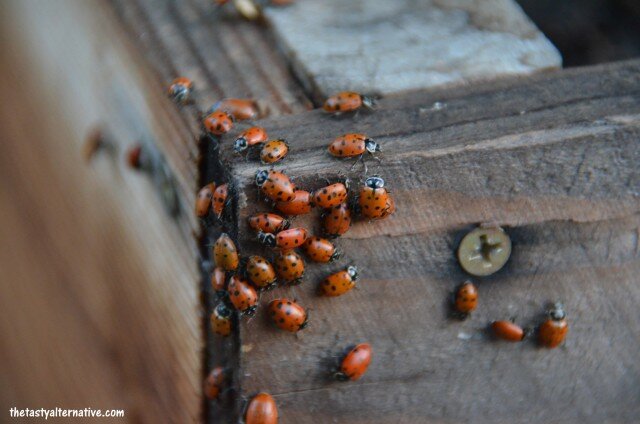 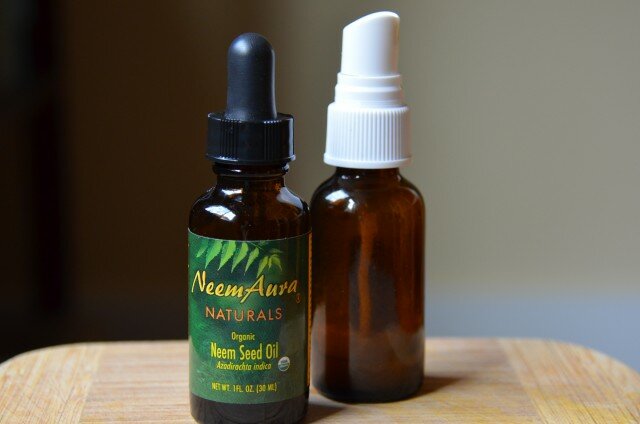 If all else fails, try some neem oil.  Apparently, white files do not like the stuff.  You can purchase pre-made sprays, but I went right to the source and bought some oil.  I added about seven droppers full of oil to a small spray bottle and filled the rest with water.  Then I sprayed the oil and water mixture liberally on the top and bottom of each leaf.  As I was spraying (especially on the new leaves) white flies were flying all over my face!  They are relentless and soooo annoying!  I went for the neem oil after all my lad bugs flew away and hope it helps.  I just found a pumpkin starting to grow, so I’m trying to keep the plant strong!