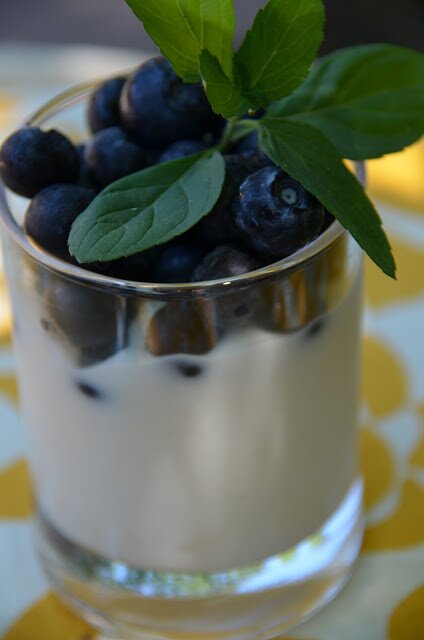 I have had a long somewhat frustrating run at homemade yogurt. The last batch I attempted was a runny mess and grew red mold inside (somehow) and I threw my hands up.  Last month I was really craving some yogurt, and felt motivated to try it again.  This time I turned to Kelly’s blog, The Spunky Coconut, for assistance.  She uses gelatin to thicken her yogurt and I was like, YES! This is it!  I took some time to experiment with the gelatin.  I was looking for a creamy texture, one much like store bought.  The two teaspoons of gelatin is PERFECT!  The texture is spot on!  I know you will love this recipe.  I am pleased with the outcome and happy to say I have been enjoying creamy, tangy (dairy-free) yogurt and loving it!  I also experimented with a vegan version for my vegan peeps out there. 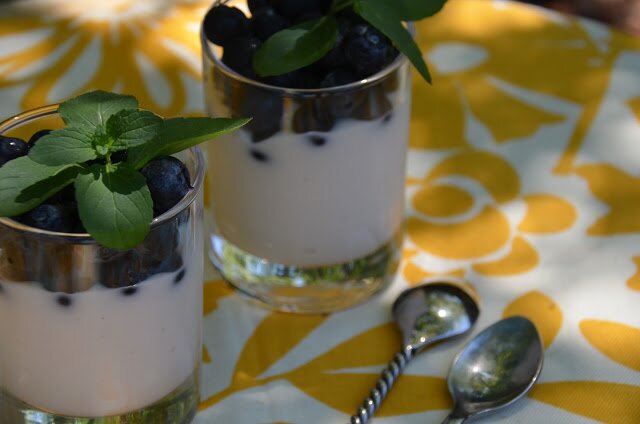 How to Make Cashew Milk:
-Soak 1 cup of raw cashews over night (8 hours is great).  Strain and rinse.  Blend with 4 cups of filtered water for 45 seconds. Let sit for 15 minutes.  Scoop off any excess foam.  Stir and use 2 cups for the yogurt.  Save the other 2 cups for a thousand different uses.  Cashew milk/cream rocks!

1.  Add the milks, honey, and vanilla to a large, heavy pot and heat until 185 degrees.  Stirring often, taking care that the milk does NOT burn on the bottom.  A very gentle, slight simmer is fine.  I like to use (and thus recommend) a dutch oven to heat the milk.

2. In another large pot, add your jars and lids, water to cover, and bring to a boil.  Simmer jars and lids for 10 – 15 minutes.  Set a clean towel on the counter somewhere and carefully remove the jars to cool when they have been properly sterilized.

3.  After the milk comes up to 185 degrees, remove from the heat and allow to cool.  To speed up the process, I pour the milk into a 4-cup glass Pyrex and line my crock pot with ice packs and put the Pyrex with the ice.

4.  In a small bowl, add 1/4 cup ROOM TEMP water and mix in the 2 teaspoons of gelatin.  Then add it to your milk, use immersion blender to incorporate the gelatin.  I usually add the gelatin between 110 – 120 degrees.

6.  Transfer the milk into a sterilized 4-cup glass container (or 2 smaller containers), or bunch of little yogurt containers. Place in your yogurt maker for at least 12 hours.  Do not shake, move, or disturb in any way while the milk cultures.  Please see below for how I use my yogurt maker for this process.

7.  After culturing for 12 hours, remove the jars from yogurt maker and give the jars a good shake.  My jars always have a liquid in the bottom, so give it a good shake. Let them cool for about an hour before you place in the fridge.  Refrigerate at least 8 – 10 hours to allow the gelatin to set up and thicken the yogurt.

*I cannot offer any milk subs here.  Cashews are great in that they thicken naturally, so I’m not sure how this would work with, say, just almond milk.  You would need to increase the gelatin, but not sure by how much.

*Vegans use maple syrup instead of honey and 1/2 teaspoon agar agar.  After the milk hits 185 degrees, remove a 1/4 cup of the milk and stir in the 1/2 teaspoon agar agar.  Then add it back in the milk and whisk until well incorporated.  When the temp drops to 100 degrees, add in the 5 capsules of probiotics.  Proceed as suggested above.  The agar agar yogurt will be thick after culturing. Place in fridge until cool.  Vegans might also want to experiment with pectin or sunflower lecithin as thickeners.  I personally stay away from seaweed based thickeners (such as agar agar), as it can exacerbate IBD symptoms and cause inflammation in the intestines.  I stopped ingesting carageenan long ago for this reason (it’s actually why I started making homemade nut milk 5 years ago). 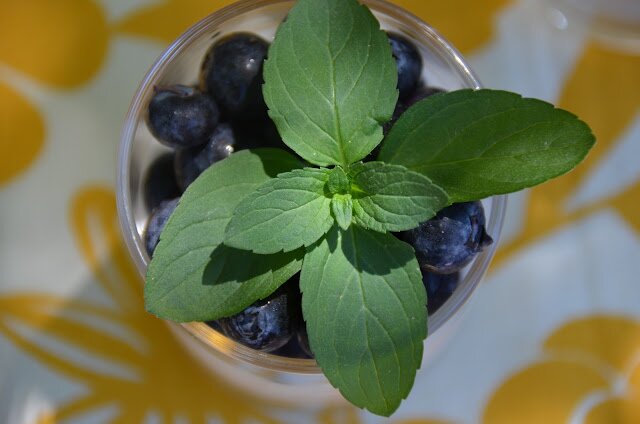 *
It’s extremely important to sterilize your jars.  I also sterilize anything that will touch the milk.  I even clean out my blender with a little hydrogen peroxide before I make the cashew milk. 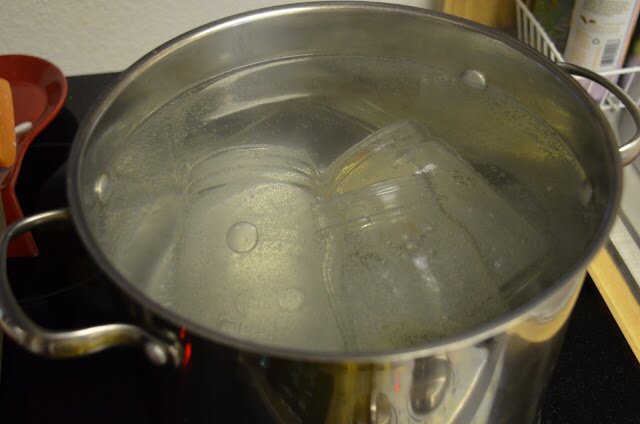 Here is the milk coming to temperature (185 degrees) in my dutch oven. 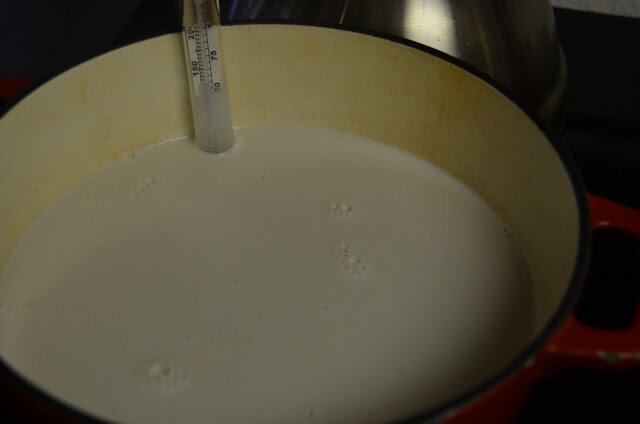 After it reaches 185 degrees, I transfer into a sterilized 4-cup Pyrex. 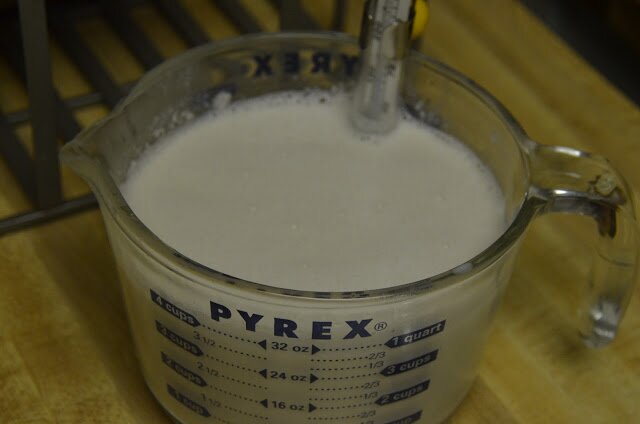 Okay, the most annoying thing about making yogurt is waiting for it to reach temp, then waiting for it to cool down.  So I make yogurt in the evening after the kids are in bed, and I watch reruns of How I Met Your Mother or Arrested Development on Netlifx to pass the time.  Win-win! 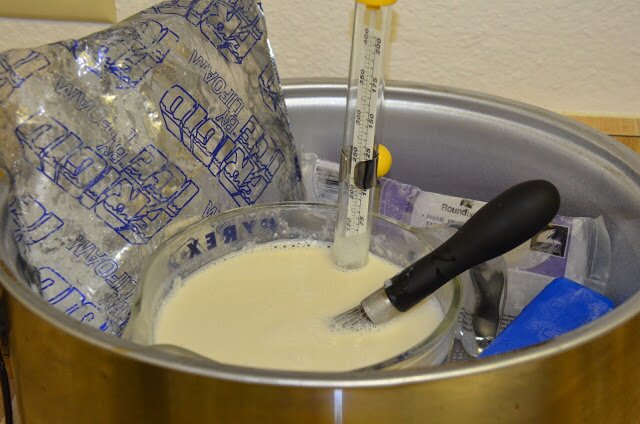 Here is the gelatin mixed with water 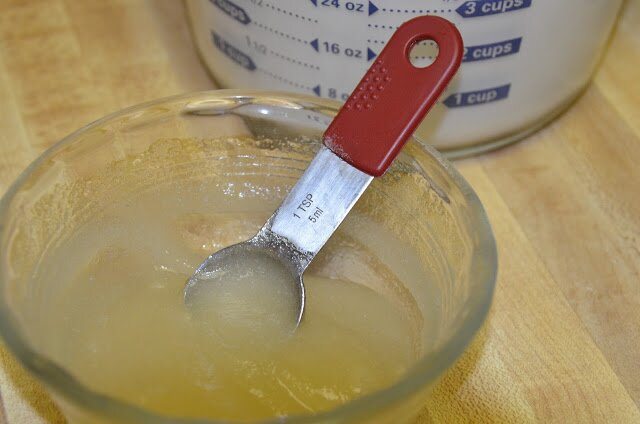 I like to use these large 4-cup glass jars 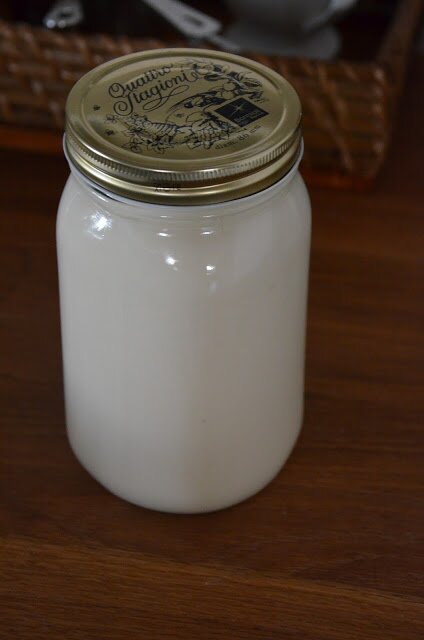 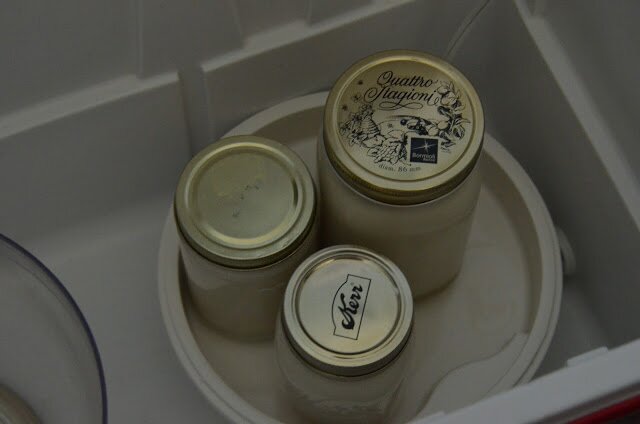 Here it is before I close it up 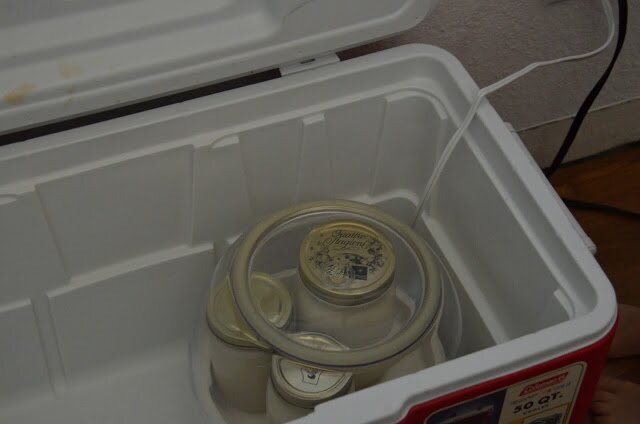 *
Here is the yogurt.  So creamy and perfect.  Not ONE gelatin lump found in this recipe! 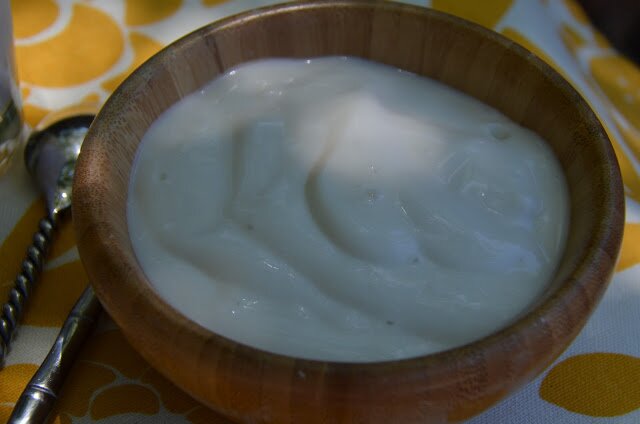 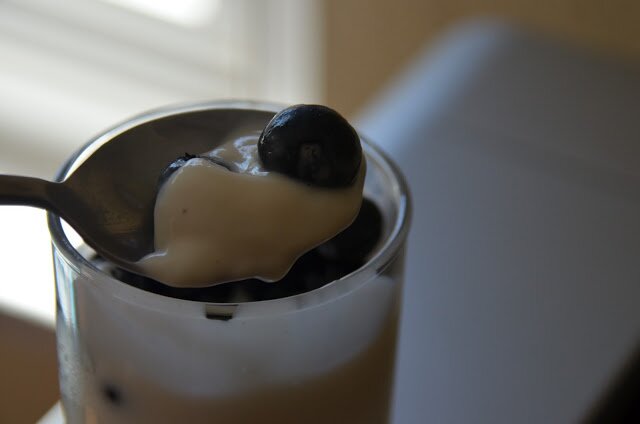 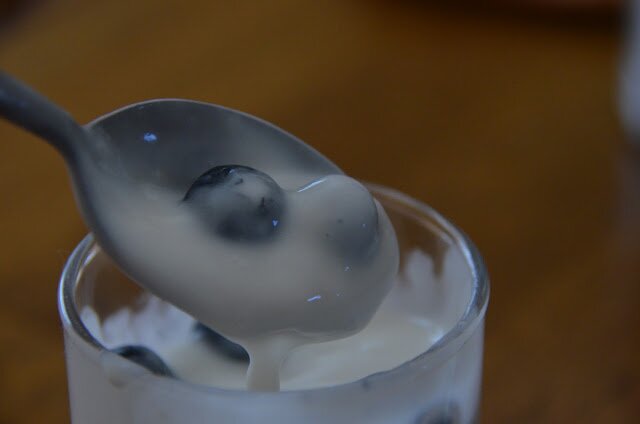 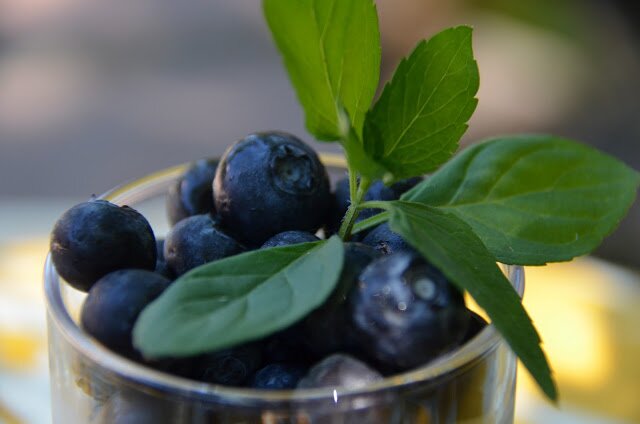